Will Michael Bloomberg’s Jewishness help or hinder his run for the White House? 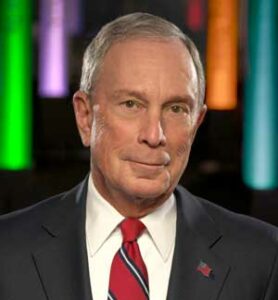 By RON KAMPEAS
WASHINGTON (JTA) – After a season of maybes, the media magnate and former New York City mayor who got the phrase thrice-elected into his bio is entering the presidential race with a bang.

Michael Bloomberg announced that he would run for the Democratic nomination and rolled out a nationwide $34 million ad campaign.

“Jobs creator, leader, problem-solver,” said the ad that Bloomberg, 77, to formally launch his White House drive. “It’s going to take all three to build back a country.”

Bloomberg, who calls President Donald Trump a “menace,” is depicting himself as the triple threat needed to take down Trump. But some of his perceived assets could turn out to be liabilities, while some of the negatives might be turned to his favor.

He’s Jewish.
Plus: Bloomberg may be the Jewish presidential candidate for whom Jewish voters are waiting. Bernie Sanders may inspire Jewish liberals, but he keeps company with folks that send up red flags for pro-Israel Jews. The other Jewish candidate in the race, Marianne Williamson, barely registers in the polls.

Bloomberg comes across as a snapshot of what surveys of Jewish voters suggest is representative of a good chunk of the demographic: socially liberal and conventionally pro-Israel. During the 2014 Gaza War, Bloomberg defied a Federal Aviation Authority ban on flying into Israel after rockets landed near Ben Gurion Airport. In 2011, he added a five-story wing to the Magen David Adom first responders station in Jerusalem. In 2003, he funded an expansion of the Hadassah University Medical Center named for his mother. In September, he launched Hazira, an innovation program to improve Israeli cities.

If Bloomberg is the nominee, the Republican Jewish Coalition, hoping to paint Democrats as anti-Israel, may have to come up with a lot more than the $10 million it budgeted for the ’20 campaign.

Minus: What was thrilling for Jews about Joe Lieberman’s 2000 appearance as the Democrats’ vice-presidential nominee was his unapologetic Jewishness. Bloomberg? Not so much.

What kept Bloomberg from running in the past was his expressed doubt that Americans would vote for a “short, divorced Jewish billionaire.” That self-doubt, along with the fact that Bloomberg deferred to his ex-wife and raised his daughters as Anglicans, could be a factor for some Jewish voters. Why invest Jewish pride in a candidate who is not proud to be Jewish?

Then there’s the anti-Semitism factor. Bloomberg is rather easily lumped in with other Jewish billionaire bogeymen portrayed by some on the right as seeking to make the country less American, a theme picked up on by comedian Fred Armisen, who played the former mayor this weekend on “Saturday Night Live.”

“I’d like to see those Trump supporters come up with a conspiracy theory about a Jewish billionaire with his own media company,” he said. “Good luck making that stick.”

“I’m disgusted by the idea that Michael Bloomberg or any other billionaire thinks they can circumvent the political process and spend tens of millions of dollars to buy our elections,” the Vermont senator said in a statement after it was reported that Bloomberg had already spent more than $30 million on television ads. “It’s just the latest example of a rigged political system that we are going to change when we’re in the White House.”

Bloomberg is also not divesting himself of Bloomberg LP, the sprawling privately held company that provides financial data tools, an equities trading platform and operates various news outlets, including television and radio networks and two magazines. That could open him up to the kind of self-dealing charges that have plagued Trump, who also declined to divest from his business. Bloomberg’s news division has already pledged not to investigate him (or his rivals).

Plus: To the degree that Trump’s appeal to voters was based on his perceived success, well, Bloomberg is richer — 17 times richer. Unlike Trump, Bloomberg never drove any of his properties into bankruptcy.

Bloomberg has also given away a substantial portion of his fortune. Last year he gave $1.8 billion to his alma mater, Johns Hopkins, for financial aid for students — believed to be the largest single donation ever to an institute of higher learning. In 2014, upon being chosen for the inaugural $1 million Genesis Prize — the so-called Jewish Nobel — he set the standard for future recipients by paying it forward to charity.

Trump had to be nudged into giving $1 million he had pledged to a veterans’ charity, and this month paid out nearly $2 million in charitable donations as a penalty after losing a civil suit over the misuse of his personal foundation.

Every Town For Gun Safety, which Bloomberg founded and largely funds, is giving the National Rifle Association heartburn. The NRA, which once swatted away gun control advocates like gnats, posted on Twitter an image of Bloomberg looming over the executive mansion above a caption accusing him of “try[ing] to buy the White House.”

He’s A Three-Term Mayor.
Plus: Bloomberg inherited a deficit when he assumed the mayoralty from Rudy Giuliani, now Trump’s personal attorney, and left the city in the black 12 years later. He presided over the city’s recovery from the 9/11 terrorist attacks. He’s a moderate who governs from the center. In his inaugural campaign ad, Bloomberg pointedly noted that anyone who liked their health insurance could keep it — the only substantive position he took in the ad and an explicit rejoinder to both Sanders and Sen. Elizabeth Warren, D-Mass., who have vowed to end private health insurance.

Minus: Hillary Clinton aimed for the center in 2016 while Trump turned out the base, emerging with the victory despite falling short in the popular vote. Bloomberg also has some liabilities, in particular New York’s stop-and-frisk policy during his administration that made him unpopular with African-Americans, whose enthusiasm next year is seen as critical to winning the presidency. Recently, he apologized for the policy in an appearance at a black church.

He’s Blunt.
Plus: At the 2016 Democratic National Convention, Bloomberg was a barn-burner, one of a handful at an event notable for its lack of luster. He eviscerated Trump in a way that may make the president wary of encountering Bloomberg on the debate stage.

“Trump says he wants to run the nation like he’s run his business,” he said. “God help us. I’m a New Yorker, and New Yorkers know a con when we see one!” The crowd loved it.

Minus: He turns that take-no-prisoners attitude not only on political rivals but on all comers. Bloomberg has apologized in recent weeks to the women in his employ he has verbally abused over the years.