Will the real obscenities in 2018 please stand up? Health care is a Jewish priority!

DC Report
By Douglas Bloomfield
The true obscenity in 2018 America isn’t Rosanne Barr’s racist tweet or Samantha Bee’s vulgar term to describe Ivanka Trump, which her father has used repeatedly to describe other women. Nor is it Donald Trump himself boasting on the infamous Access Hollywood about grabbing women by their genitalia, or Tennessee Rep. Diane Black blaming school shootings on pornography.

These may all be offensive, obscene and disgusting, but  these are nothing compared to the billion dollar campaign by drug companies to create unnecessary and dangerous demand by patients for drugs consumers know nothing about, pressuring —and bribing—physicians to prescribe them and enlisting the complicity of a supine Congress and administration.

Pharma’s Expenses
The industry claims prices are so high because of its enormous investment in research and development — for which they’ve been rewarded with 17-year monopolies (patents) to charge anything they want.  But the truth is they spend billions more on advertising, promotion and lobbying to keep prices and profits high.

The National Academy of Sciences has said drug companies “spend substantially more on marketing and administration than on research and development.”

The American Medical Association, which wants drug advertising banned, said big pharma, which is a common expression, spent $6 billion last year alone on three quarters of a million ads aimed at consumers, according to Kantar Media. That drives up prices and “inflates demand for new and more expensive drugs, even when these drugs may not be appropriate,” Kantar noted.

The System Is Broken?
Price gouging is politically protected. What politician wants to investigate big contributors, especially when one of them, Mylan CEO Heather Bresch, is the daughter of a colleague, Sen. Joe Manachin (D-W. Va.)? When Mylan nearly tripled the prices of EpiPen, the emergency injector for severe allergic reactions, to over $600 for a two-pack, the outrage on Capitol Hill was short-lived. Bresch explained the price hike was intended “to show the system is broken.”

She’s got that right, but she’s only making the problem worse along with people like “Pharma Bro” Martin  Shkreli, former head of Turing Pharmaceuticals. He raised the price of Daraprim, 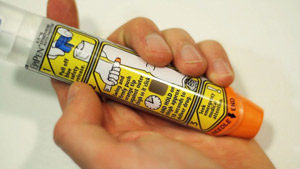 which treats parasitic infection, by 5,000 percent to $750 per pill.  Why? Because he could, he gloated.

You can bet big pharma will be spending millions this year to defeat Sen. Claire McCaskill (D-Miss.), who introduced legislation to remove tax deductions for the billions the industry is spending on marketing.  But there’s no need to worry; Republicans are blocking the legislation.

That may be one reason big pharma and its friends donate more to Republicans than Democrats, but not by much. (Thirteen of top 20 recipients of $14+ million in drug money so far in the 2018 election cycle are Republicans, according to Opensecrets.org, and the industry has spent $84.7 million on lobbying so far this year.) Congress once more shows it is more responsive to its donors than its constituents.

Drug makers have a good friend in the White House, too.  Companies like Pfizer and Ambien gave $1.5 billion to Trump’s inaugural committee, Statnews.com reported.  And the man the president picked to be his Health and Human Services secretary is Alex Azar, whose previous job had been president of pharmaceutical giant Eli Lilly.

Ads Gloss Over Risks
Polls show a majority of ordinary Americans, doctors, academics and global healthcare authorities oppose direct-to-consumer drug ads, according to the Los Angeles Times. But that is apparently outweighed by the big bucks big pharma puts into their campaign coffers.

Drug ads are usually 30-60 seconds, most commonly on news broadcasts, where the demographic is usually older. Advertisers are required to list major risks — my favorite is “may cause death”—telling little or nothing about cost, usage requirements, long-term treatment, and other information—just off-hand advice to “check with your doctor.” The warnings are spoken softly at supersonic speed.

Doctors are a lucrative target and much is spent on persuading them to prescribe the latest miracle cure.

Critical Issues For Jews
Trump was right when he said, “The drug lobby is making an absolute fortune at the expense of American consumers.”  Unfortunately, he is part of the problem, not the solution. He opposes authorizing Medicare to negotiate directly with drug companies to lower prices, which would save consumers millions.

Health care is a high priority for most Jewish voters — some even rank it above Israel on their political agenda. We are an aging population and a high proportion of Medicare users, with nearly 20 percent seniors, almost double that of the general population. Drug prices, availability and insurance are thus critical issues for many Jews.

There’s no way ads can give consumers in less than 60 superficial seconds a fraction of the information they need —and should be getting not from television but from their doctors, who know them and understand the problem better.

Ads May Create Demand
The ads put inordinate pressure on doctors to prescribe meds they may not feel confident with but don’t want patients going elsewhere or accusing them of not providing necessary treatment.

Commercials also can mislead consumers into thinking they have diseases they don’t, in fact, have— ask any med student; they seem to come down with symptoms of many of the ailments they study — and they should seek cures that they don’t need and can’t afford.

All too often, ads can create demand for a treatment for a condition that doesn’t exist or a drug of no benefit to that patient, warns Dr. John Henning Schumann of the University of Oklahoma.

The opioid crisis is driven in large part by aggressive, and often deceptive, marketing by manufacturers and by doctors easily pressured into over-prescribing for patients complaining of excessive pain.

The FDA began permitting pharmaceutical advertising on television in 1997 —New Zealand is the only other country that permits it. Until then ads focused on over-the-counter treatments for acid indigestion, tired blood and the heartbreak of psoriasis. It’s time to return to those good old days.

We already outlaw cigarette advertising on television, now is the time to ban another dangerous threat to the nation’s health, drug advertising.