With an eye on Iran: How will pandemic impact play out in the region? 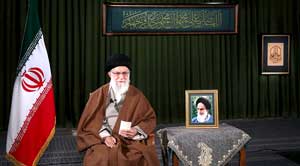 By RON KAMPEAS
WASHINGTON (JTA) – Iran by its own accounting is the fifth-ranked among nations in coronavirus fatalities. Outside experts say the rate is likely much higher.

The confluence of hard-hitting sanctions on the country and Iran’s floundering theocracy frustrated an adequate response to the pandemic, according to most accounts, but the country’s supreme leader, Ayatollah Ali Khamenei, knows who to blame: Genies. And Americans.

Alarming
Khamenei’s March 22 speech marking Nowruz, the Persian New Year, has frightened regime watchers inside and outside the country. He blamed the pandemic on the demons identified in the Quran as “Jinn,” known as genies in Western lore, and the American intelligence services working in tandem.

“We have jinn and human enemies that help each other,” he said, according to a translation by Maryam Sinaiee, a British-Iranian political analyst writing for Radio Farda, the U.S. government’s Persian language news service. “The intelligence services of many countries work together against us.”

Among these, he said, was the “most evil enemy of the Islamic Republic” — the United States.

It’s an alarming prospect: If Khamenei truly believes that the CIA is working hand in hand with demons to engage in biowarfare against Iran, he may see fit to respond in kind. And any response would likely bring in Israel, the closest American ally in the region.

“The reality is that a regime under siege from all sides and that has no exit ramp might calculate that it has little to lose and a confrontation with the U.S. would be a good distraction,” Vaez told the Jewish Telegraphic Agency.

Blaming other countries is not unique among leaders worldwide: Chinese media and officials also have insinuated that the virus is a means of U.S. warfare. President Donald Trump frequently faults how China and Europe have handled the virus when he is under fire for how he has dealt with COVID-19.

The stakes are higher with Iran, given how besieged the regime is — a number of its leaders have contracted the virus and at least one has died — and the theocracy’s history of acting on the religious dictates of its leaders.

Important Speech!
“The Iranians as a result of the combined impact of sanctions and the coronavirus are under tremendous economic duress,” Vaez said. “If they had any cushion that could keep them afloat until the U.S. elections,” when Trump’s potential departure might ease sanctions pressure, “that has evaporated.”

Patrick Clawson, a senior fellow at the Washington Institute for Near East Policy whose expertise is Iran, said the language was alarming enough that for a number of days, government sites posting the speech omitted the passage about jinn — suggesting that even officials close to the 80-year-old Khamenei felt it was prudent to obscure the comments.

“Senior people in the IRGC,” the Iranian Revolutionary Guards Corps, “were saying ‘this guy is our leader, is the old man losing it?’” Clawson said in an interview.

There was good reason to be spooked, Clawson said. The Nowruz speech is the equivalent of the State of the Union.

Possible Scenarios
“This is the biggest speech of the year, this tells you what Iran is going to do for the next year,” he said.

Here are some takes on how Iran’s coronavirus-induced aggression might manifest, how it might not and what can be done to mitigate it.

Militias in Iraq aligned with Iran have attacked U.S. targets in the country in recent weeks, including a rocket attack that killed two American soldiers. U.S. officials are blaming Iran for the attacks.

“We’ve made clear that the Iraqi Shia militias are funded, trained and equipped by the Iranians,” Secretary of State Mike Pompeo said earlier in March. “We’ve urged the Iranians not to do that.”

An assistant secretary of state, David Schenker, tied the attacks to the coronavirus.

“This is in fact not only an effort to have an impact on domestic politics in Iraq, but also to divert attention from the coronavirus both in Iraq and in Iran, where it’s being dramatically mishandled,” Schenker told reporters at a recent briefing.

Who Is In Control?
Clawson has his doubts. The militias, he said, have minds of their own and are less likely to take orders from Iran since the U.S. assassinated a top IRGC general, Qassem Soleimani, earlier this year.

“Iranians have after Soleimani’s death lost control of those militias,” Clawson said. The militias “are in the teenage stage, they do what they want.”

The regional chaos that predated the virus also mitigates against immediate action. Iran’s proxy in Lebanon, Hezbollah, for instance, is dealing with protests that aim in part to remove the militia from power.

Iran has played a long game historically when it retaliates for perceived aggression.

“I read the speech as implying that Iran should consider retaliating in kind with bioweapons,” Clawson said. “It would be months down the road, not days.”

U.S. Pressure
The Nuclear Threat Initiative, a weapons of mass destruction watchdog, says there have not been definitive assessments recently that Iran has biological weapons, but it likely has the capability. Getting to actual weapons, and selecting an appropriate arena to make it clear that Iran is ready to use them, would take time.

The Trump administration has not relented in pressuring Iran with sanctions, imposing new ones recently on 20 companies and officials that it says are implicated in attacks on U.S. targets in Iraq. The aim of what the Trump administration calls a “maximum pressure” policy is to get Iran to stand down from its adventurism, although it has yet to show substantial results.

Now is not the time to relieve those sanctions, according to hawkish critics of the regime, who note that Iran has rejected humanitarian assistance that is allowed under the sanctions. Iran has even expelled a mission by Doctors Without Borders, a group that was positioned to alleviate the impact of the virus, baselessly accusing the group of espionage.

“The Iranian government had the power to curtail the virus, but instead they ignored the situation, lied to their people and exacerbated the situation to weaken the resolve of the international community to robustly implement sanctions,” David Ibsen, the president of United Against a Nuclear Iran, wrote in EuroNews. “Sanctions are not the villain in this regretful story.”

Vaez and his Crisis Group colleague, Robert Malley, wrote recently in Foreign Policy that the coronavirus crisis could create an opportunity to deflate tensions between the United States and Iran.

“Both Washington and Tehran have floated ideas” related to the pandemic “that, if acted upon, could break the current vicious cycle,” they wrote.

They cite Washington’s demand that Iran release foreign prisoners susceptible to the spread of the virus, and Iran’s bid for an International Monetary Fund (IMF) loan to buy equipment to tackle the virus.

Were Iran to release the prisoners, and the U.S. to refrain from blocking the IMF loan, that could set in motion a dynamic that could lead to more expansive backdowns affecting sanctions and Iran’s suspected nuclear weapons program, Vaez and Malley say.

Vaez in the JTA interview said he was not optimistic the sides would take that path.

“The reality is that this crisis is also a diplomatic opportunity, but all the indicators are now in the opposite direction,” he said. ”It seems Iran and the United States are on a collision course rather than using this crisis as an opportunity to reduce tensions.”

Mark Dubowitz, the CEO of the Foundation for Defense of Democracies think tank, said Iran’s trajectory has been for decades to accelerate and expand its malign activity outside its borders, and that a crisis was only exacerbating those tendencies.

“They’re becoming more desperate to try to strengthen and stabilize a regime that is in the throes of dissolution that looks to be entering a period of significant risk to its survival,” he said in an interview.

The balance between personal liberty and the obligation to save lives
DC Report: Koved vs Covid: A view of President Trump