With Holocaust summit in Jerusalem, Israel gets dragged into Europe’s memory wars 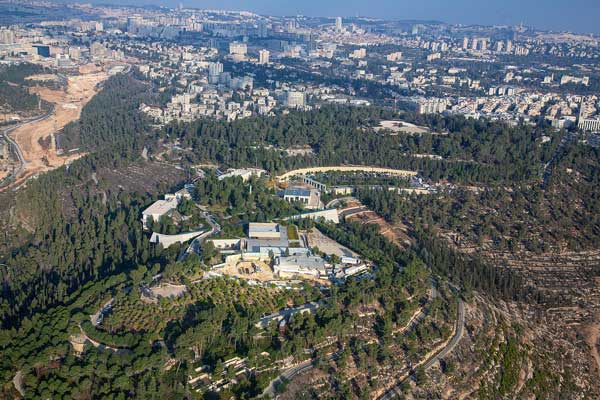 An aerial view of the Yad Vashem Holocaust memorial museum in Jerusalem, Dec. 17, 2019. Dozens of world leaders are set to converge there for a commemoration of the 75th anniversary of the liberation of Auschwitz. Photo courtesy of Moshe Shai/Flash90.

By SAM SOKOL
JERUSALEM (JTA) — A major gathering of world leaders in Jerusalem meant to highlight the world’s determination to learn the lessons of the Holocaust has become mired in controversy even before it has started, dragging Israel into a battle over history debates still raging in Europe three-quarters of a century after the end of World War II.

Some 46 presidents, princes and prime ministers are due to converge on the Israeli capital on Thursday, Jan. 23 for the Fifth World Holocaust Forum, an event organized by President Reuven Rivlin, Yad Vashem and the Israeli Foreign Ministry to commemorate the 75th anniversary of the liberation of Auschwitz. The brainchild of European Jewish Congress head Moshe Kantor, the event will feature addresses by the leaders of Germany and Allied nations, including Russian President Vladimir Putin.

Political Pandering?
Kantor has asserted that the event’s purpose is “to discuss moral status of the world, to examine the situation of civil societies and work together to address threats and dangers.” But that message is proving at odds with the divisions the event has generated.

Angered by Putin’s invitation to address the gathering, Polish President Andrzej Duda announced earlier this month that he would withdraw from the commemoration and attend his own event at Auschwitz if he were not allowed to speak. Yad Vashem pushed back, saying it was “especially appropriate” for the leaders of the Allies that “liberated Europe” to speak.

Poland and Russia have a tense relationship complicated by a bloody past, and they continue to tussle over responsibility for wartime atrocities. In December, Putin accused Poland of cooperating with Germany in 1938 and called Poland’s prewar ambassador to Nazi Germany “scum and an anti-Semitic pig” for praising Hitler. In January, Duda accused Russia of much the same, saying in a speech to Polish Jewish leaders that Russia had attacked Poland in 1939 “alongside Nazi Germany” and “co-facilitated” the murder of European Jews.

The dispute over the current commemoration echoes a similar fight over the last one, in 2015, when Poland declined to invite Putin to attend a memorial event at the Auschwitz concentration camp in southern Poland. Putin was subsequently invited to appear at an alternate event organized by Kantor’s European Jewish Congress in Prague, eliciting fierce protests by Czech Jews. The Russian leader ended up attending an International Holocaust Remembrance Day event at the Jewish Museum and Tolerance Center in Moscow.

Battles Over Guilt
“Neither Russia nor Poland are innocent when speaking about the Second World War or the Holocaust,” said Havi Dreifuss, a historian at Tel Aviv University. “This ceremony, which should have promoted discussions about the Holocaust and anti-Semitism, became a platform for political conflict over history. It is not a historical debate but a political and diplomatic one that uses — and mainly misuses — history.”

Russia and Poland are hardly the only post-communist nations continuing to wage public battles over wartime guilt. In Hungary, a dispute over how to portray the country’s collaboration with Germany delayed the opening of a Holocaust museum in Budapest for years. Lithuania, which has come under fire for rewriting its own wartime history to absolve its citizens of Holocaust crimes, has criticized Russia for its own revisionism.

“In the end, most important is that whoever does speak should speak the historical truth and should not seek to politicize Auschwitz,” Polish Chief Rabbi Michael Schudrich told the Jewish Telegraphic Agency.

Meanwhile, Ukrainian President Volodymyr Zelensky, whose country is still in an undeclared war with Russia in which the Kremlin has repeatedly accused it of terrorizing its Jewish population,  recently announced that he would attend the Jerusalem gathering. Only days earlier, his ambassador in Tel Aviv told JTA that the matter was “still under consideration.”

Despite persistent rumors that Zelensky was holding off on announcing his attendance because he was not among the speakers, the Jewish comedian-turned-politician told The Times of Israel that he had postponed his decision due to the recent downing of a Ukrainian jet over Tehran.

“I think I should [speak], but I will go anyway,” he was quoted as saying. “It is very important to honor the memory of the Holocaust victims.”

Others in Kyiv took a more confrontational approach. A spokesman for the Vaad, one of several competing umbrella organizations claiming to represent Ukrainian Jewry, accused Kantor of working to “create a good format for Vladimir Putin to instrumentalize the Holocaust subject for propaganda needs.”

A spokesperson for the World Holocaust Forum, the nongovernmental organization Kantor is chairman of, said decisions regarding speakers had been made in conjunction with the Israeli government and that “it would be a great shame to waste this opportunity on disagreements, diplomatic rivalries and politics.”

Both Yad Vashem and Rivlin’s office declined to comment on Putin’s presence.

Rehabilatation Of UltraNationalists
Israel has largely tried to avoid directly addressing the battle over the historical record in Central and Eastern Europe, where many nations are seeing a revival of veneration for nationalist figures who resisted the Soviets but were complicit in the persecution of Jews.

But in 2018, the country could not avoid protesting Polish legislation that made it illegal to blame Poland for Nazi crimes. Israel said the law limited free speech and research about the Holocaust, including about the actions of Polish citizens who killed Jews, and the exchange triggered a diplomatic crisis.

Jerusalem has also become increasingly critical of Ukrainian attempts to rehabilitate ultranationalists, with the Israeli and Polish ambassadors to Kyiv issuing a joint letter earlier this month condemning the honoring of Stepan Bandera and Andryi Melnyk, two collaborators with the Third Reich.

Israel finds itself “between a rock and hard place if you see it solely through the prism of historical issues,” Efraim Zuroff, a Holocaust scholar and the director of the Simon Wiesenthal Center’s Jerusalem office. “But there is also realpolitik involved, and in that respect we have to have good relations with Russia because of its role in the Middle East regarding Syria and Iran.”

The question, Zuroff said, isn’t why Israel is not taking Putin to task for his revisionism, but why it does not do more in confronting smaller countries that play much less of a regional role.

Ukrainian Chief Rabbi Yaakov Dov Bleich told JTA he hoped the speeches at the event would not be used as a platform for scoring political points.

“I would hope that Putin will be wise enough not to use this forum to espouse his attacks on Ukraine or Poland,” Bleich said. “I understand that it is a bit late in the game to try and change the format of the event, since indeed so many heads of state will be attending.”