With Putin cracking down on democracy, Russian Jews are moving to Israel 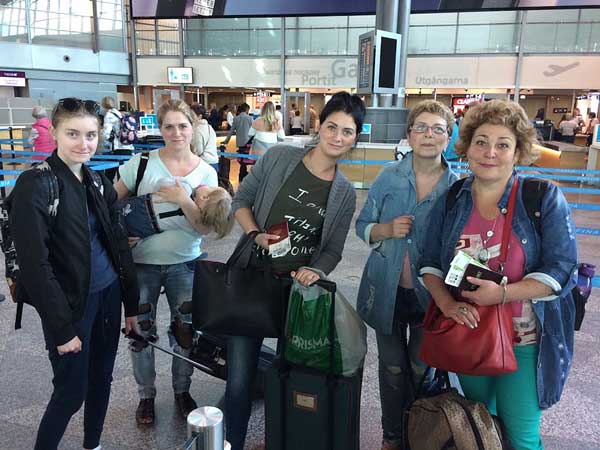 Immigrants from Russia on their way to Israel at Helsinki Airport, November 2018. Photo courtesy of International Christian Embassy Jerusalem.

By CNAAN LIPHSHIZ
NEW YORK CITY (JTA) – Less than a year after he immigrated to Israel from Russia, Dima Eygenson has already voted twice in his adopted country.

In April, Israeli voters cast ballots in an election that resulted in a virtual tie between the longtime incumbent prime minister, Benjamin Netanyahu, and political newcomer Benny Gantz. They were back at the polls because Netanyahu couldn’t cobble together a governing coalition.

“It’s pretty exciting and new to me that voting could actually make a difference, lead to a real change in the country’s fate. You can vote in Russia, but it will make no difference.”

The sense that Russia is growing increasingly illiberal is helping drive a surge of emigration by Jews there to Israel in the past four years. Since 2015, nearly 40,000 of them have arrived in Israel. In the entire decade prior to 2015, only 36,784 Russian Jews had come.

Deterioration Of Freedoms
That’s not the only reason for the current wave of immigration: among other causes are economic woes and a persistent crime problem. Yet many observers and immigrants see those issues as merely contributing factors to an exodus pushed largely by the significant deterioration in personal freedoms under President Vladimir Putin, a phenomenon some have begun to call the “Putin aliyah.”

For Eygenson, who had a thriving business in Russia, the draw of Israel was largely spiritual. While visiting the mystical northern city of Safed several years ago, he experienced a “sudden and deep connection” to his Jewish identity. But Putinism and its consequences was a decisive factor in his decision to move along with his 14-year-old daughter and non-Jewish wife, who gave birth to a second child in Israel earlier this year.

“Ninety percent of Russians really love Putin. They admire him, they think he’s doing the right thing, focusing on hating minorities and gay people,” Eygenson said. “The other 10 percent, to which I belong, don’t feel free to say what we think about this.”

Marina Shvedova, a Jewish translator from Moscow, left five years ago to study in the United States and never returned.

Peter Pomerantsev, a London-based Jewish journalist, left Moscow in 2010 “to escape Putin’s assault on reason,” as he wrote in The Guardian. “I wanted to live in a world where words had meaning.”

Grigory Zisser, a 32-year-old programmer who immigrated in 2017 to Bat Yam, near Tel Aviv, told JTA that he made the move because “when I start a family, I want my kids to grow up in the free world.”

Russia’s repression of the media and political opposition has been building for years and has been painstakingly documented by international human rights groups. 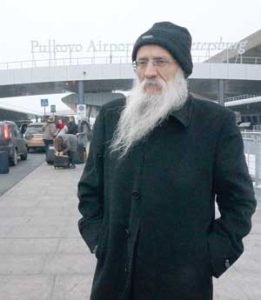 Feelings Of Insecurity
Tanya Lokshina, the associate director of Human Rights Watch’s Europe and Central Asia division, said that a “turning point” came with the 2012 jailing of Pussy Riot, a rock band whose three members were convicted of hooliganism for performing a song criticizing the Orthodox Church’s support for Putin. Putin’s return to the presidency that year “ushered in a new period of accelerated repression,” Freedom House wrote in its report for 2012.

In 2014, the year Russia invaded and annexed Crimea, the annual Russian immigration to Israel passed the 4,500 mark for the first time in a decade. In 2018, the number of arrivals topped 10,000, and likely will reach 15,000 this year, according to Israeli government projections.

Book Theft
In addition to the general feeling of insecurity shared by many Russian liberals, Russian Jews are beginning to see signs that they are again being singled out in a significant way as an ethno-religious minority.

In 2013, the corruption trial of a Jewish teacher in a rural area was tainted by allegations that the judge and prosecutor resorted to anti-Semitism to discredit the defendant. In 2015, Russian prosecutors confiscated books from a Jewish school affiliated with the Chabad Chasidic movement in Yekaterinburg following complaints that its students were being taught to hate non-Jews. In 2017, a court in Sochi blacklisted a book by a 19th-century rabbi about the Jews’ struggle to resist forced conversion to Christianity.

Also that year, authorities kicked out a rabbi from the Chabad movement and labeled him a security threat without providing evidence to back the claim. About a dozen Chabad rabbis — all of them foreign nationals working in Russia — have been evicted from Russia in recent years for various reasons.

Meanwhile, anti-Semitic incidents, while still rare in Russia compared to Western Europe, seem to have escalated in severity. Recently, nationalists broke into a synagogue in Krasnodar, near the Black Sea, to conduct an illegal “search” for evidence of what they said was a terrorist plot. The group stole documents, local congregants said, and police have not intervened.

Rabbi Gorin Downplays Bias
These incidents have prompted vocal protests by the Chabad-affiliated Federation of Jewish Communities of Russia, or FJCR, the largest and most prominent Jewish group in the country.

Rabbi Boruch Gorin, a senior spokesman for FJCR, said the government’s “positive attitude” toward the Jewish community has not changed and that the emigration may owe to political issues, but not to anti-Semitism.

Russian authorities continue to help Jewish communities — especially those led by Chabad rabbis —carry out an unprecedented revival of Jewish life in the country. Since 2012, at least a dozen synagogues were opened or returned to Jewish communities across Russia, including in Moscow, Tomsk, Perm, Syzran, Kaliningrad and Archangelsk. In 2012, a $20 million Jewish museum was opened in Moscow with government assistance. Kosher restaurants and Jewish cultural events are still popping up across Russia, making many Jews feel more at home than they have in decades.

According to Gorin, the expulsion of rabbis is part of a larger crackdown on foreign clergy, while the labeling of some Jewish texts as extremist is part of a wider policy to curtail religious extremism. He said Jews are collateral damage of both policies.

Reminiscent of Communist Period
Still, some of those who experienced state-sponsored anti-Semitism under communism say they are encountering growing reminders of it in Putin’s Russia. One of them is Rabbi Yosef Mendelevitch, who in 2012 began giving talks to Jewish audiences about his role in a 1970 attempt to hijack an airplane and fly it to Israel. Mendelevitch was captured and spent 11 years in a gulag.

Earlier this year, a local newspaper characterized him as a terrorist and criticized his appearance at a Chabad synagogue in Novosibirsk. Soon after, he said, demonstrators began showing up at his talks with placards reading “Mendelevitch is a terrorist.” The terrorist language eventually found an outlet in the national media and Mendelevitch’s popular talks came to an abrupt end.

Mendelevitch told JTA that when he traveled earlier this year to Moscow to inquire why his tour had ended, he learned that Jewish organizations “were told not to host me any longer.” Mendelevitch declined to elaborate, citing the “safety of everyone involved.”

“We have had no message from authorities about Mendelevitch, though the agitation around him clearly came from somewhere,” Gorin said. “We are also asking ourselves where from.”