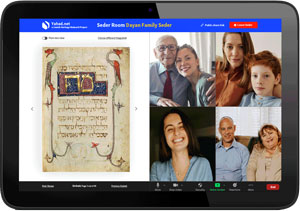 The first upgrade includes a near doubling of haggadot that participants can choose from, now at nearly 50, which span most ethnic, language and religious varieties in the Jewish community. On a technical level, the new split screen feature not only enables participants to follow the seder at their own pace, but also allows them to track it with a table-like atmosphere of seeing and speaking with fellow attendees, helping to infuse engagement. Updates this year also include designated seder leaders and functions that allow users to jump ahead between different haggadot and back to the leader’s page without impacting the view of other participants in their virtual room.

Also new for this year is the platform’s capability to be used as a tool for synagogues, congregations and other communal groups. Rabbis and community leaders can utilize Yahad to invite up to 1,000 participant screens to their seder in place of the large in-person gatherings they might have held pre-pandemic. Museums and Jewish centers have already reached out to coordinate specialized events, which include tailored mini-sites, custom selections of haggadot and more. Groups looking to coordinate their larger seder can reach out to info@jhn.ngo.

Through Yahad’s website, seder hosts can create their own virtual meeting rooms, invite their friends and family members using secure codes, and interact with each other via video and audio while following along in the seder text.

Yahad created its virtual seder platform in six weeks last year as it became apparent most of the world would enter lockdowns from the COVID-19 pandemic and prohibit Jewish families from gathering together to celebrate the Passover seder. Yahad “hosted” more than 230 virtual seders last year that they believe served several thousand Jews worldwide. The inability to get together was particularly difficult for elderly or immunocompromised people, many of whom were left on their own to conduct a seder. In some cases, people who joined with family for the seder in the past had never led a seder themselves because they relied on others. The virtual solution was a way to connect and celebrate the holiday digitally.