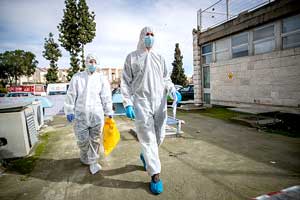 Medical staff seen after the arrival of a Chinese woman to the Shaare Zedek Medical Center in Jerusalem over suspicions she may be infected with the coronavirus, Jan. 27, 2020. Photo courtesy of Yonatan Sindel/Flash90.

(JNS) – Foreigners who recently traveled to countries in Asia where the coronavirus has spread will be barred from entering Israel, Interior Minister Aryeh Deri  has announced .

Deri said that guidelines by Israel’s Ministry of Health and general concerns about the possibility of an outbreak in Israel was behind the move, according to a report by i24 New.

The new restriction will come into force in the coming days and be for foreigners who have traveled within the last two weeks to Thailand, Macau, Hong Kong and Singapore.

Israel has already banned foreigners who recently visited China from entering the country.

Until now, no cases of coronavirus—officially now named severe acute respiratory syndrome coronavirus 2, or SARS-CoV-2—have been reported in Israel, the report said.

Separately, Japanese authorities decided to allow uninfected Israelis quarantined on the cruise ship Diamond Princess due to the illness to return to Israel the Foreign Ministry said in a statement. According to Japanese officials, there are a total of 542 confirmed cases of the infection on the cruise ship.

A new study by the Chinese Centre for Disease Control and Prevention showed that the elderly and sick are at the most at risk for infection, the BBC reported. Medical staff are also at high risk, but more than 80 percent of the cases have been mild, the data found.

BY MARCY  OSTER
NEW YORK CITY (JTA) – Israelis who are under quarantine will get special voting booths for Israel’s national elections that will be held on March 2. The decision was recently announced  by Israel’s Central Elections Committee, following a meeting with Health Ministry officials.

Under Health Ministry guidelines, Israelis returning or other visitors from Thailand, Singapore and the cities of Hong Kong and Macau must remain at home in isolation for 14 days. There are a few dozen Israelis who are under self- quarantine throughout the country, according to the Health Ministry.The polling stations will be placed in buildings with no other polls. Army Radio reported that poll workers will wear protective gear.