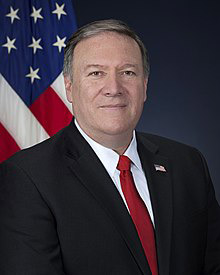 Secretary of State, Mike Pompeo, is well aware that the Department of State’s conventional wisdom on the Middle East has clashed frequently with its arch adversary: Middle East reality.

For example, in defiance of conventional wisdom, Secretary of State Pompeo is in the Middle East at a time when Israel’s security and commercial ties with pro-US Arab countries have expanded unprecedentedly, irrespective of the Palestinian issue.

Secretary of State Pompeo aims to bolster confidence in the US’ posture of deterrence by Arab regimes, which feel the machetes of Iran’s Shiite Ayatollahs and Sunni terrorism (the Muslim Brotherhood, ISIS/ISIL and Al Qaeda) at their throats, regardless of the Palestinian issue.

Furthermore, Secretary Pompeo, the former CIA Director, is meeting Arab leaders, who are intensely traumatized by the volcanic, lethal Arab Tsunami (defined as “Arab Spring” by conventional wisdom), which erupted in 2010 and is still highly tempestuous, unrelated to the Palestinian issue.

Secretary Pompeo, the West Point graduate, is briefed by pro-US Arab leaders, whose appreciation of Israel has soared since the eruption of the Arab Tsunami. The wave of intra-Arab violence has highlighted the Jewish State as an island of stability, democracy, military and commercial effectiveness and reliability in the Middle East – the most credible regional “life-insurance agent,” in face of the Ayatollahs and other patrons of terrorism, subversion and military threats, regardless of the Palestinian issue.

Secretary of State Pompeo’s track record is top heavy on rejecting wishful-thinking and oversimplification, while recognizing the inherently chaotic, unpredictable, intolerant, violent and intensely-complex, non-democratic nature of the Middle East since the 7th century, as demonstrated by the current Arab Tsunami.

The real Middle East has featured roller-coasting inter-Arab/Muslim relations; the incessant inter-Arab/Muslim wars with millions of fatalities and refugees; the recent disintegration of Iraq, Syria, Libya, Yemen and Sudan (which is probably not the last casualty); the inherent Sunni and Shite terrorism and subversion; the one-bullet, transient, ruthless, minority regimes, which rule fragmented non-nation societies; the provisional and tenuous regimes, and therefore, their dubious policies and agreements; and the Ayatollahs’ megalomaniacal aspirations which encompass the Persian Gulf, the Middle East and beyond. The aforementioned Middle East reality is completely unconnected to the Palestinian issue.

During his eight day visit to Arab capitals, Secretary Pompeo is, probably, subjected to the traditional display of pro-Palestinian Arab talk, which has been, historically, uncorroborated by the Arab walk – diplomatically, financially or militarily. Irrespective of their pro-Palestinian talk, Arabs have never considered the Palestinian issue a top-league priority. The pro-US Arab regimes are consumed with the clear, lethal and present danger posed by Iran’s Ayatollahs and Sunni subversion and terrorism.  In fact, the treacherous Palestinian track record has led most Arabs (especially in Kuwait and other Gulf States, Iraq, Lebanon, Jordan, Syria and Egypt) to consider the PLO, the Palestinian Authority and Hamas the role-models of unreliability, ungratefulness, subversion and terrorism.

The Secretary, just like National Security Advisor John Bolton, is fully engaged with the top Middle East threats to the US national security and homeland security, as well as to the survival of the pro-US Arab regimes.

Shifting attention to the Palestinian issue – by presenting a well-intentioned new peace initiative – will not only be at the expense of attention dedicated to the top threats, but will force the Palestinians to outflank the US from the maximalist/radical side, thus adding fuel – not water – to the fire. Enhancing Palestinian clout will provide a tailwind to anti-US entities in the Middle East and beyond, intensifying lethal threats to Jordan’s shaky, pro-US Hashemite regime.

Unlike some of his predecessors at Foggy Bottom, Secretary Pompeo’s track record suggests that he has learned from precedents by avoiding – not repeating – grave errors.