You don’t need Zoom or Skype to say Kaddish without a minyan. Here’s another option 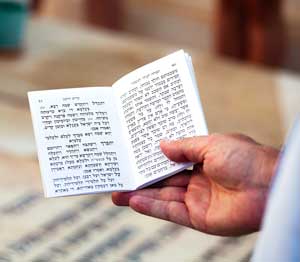 A man recites the Mourner’s Kaddish from a prayer pamphlet.  Photo courtesy of Getty Images.

By Rabbi SETH WINBERG
WALTHAM, Mass. (JTA) — Like so many others, I am feeling the spiritual loss and pain of our current inability to learn Torah and pray together in person. Many mourners are devoted to the customary recitation of Kaddish for a deceased close relative and struggling with how to do so in the absence of a minyan.

Some rabbis are encouraging internet-based solutions to hold us over until this crisis abates. I’m concerned that those solutions come with a significant cost.

Virtual And Actual Reality
The decision to blur virtual reality with actual reality and relax the rules of minyan should not be taken lightly. Well-intentioned rabbis may think they are permitting something on a temporary basis, but the implications could be far-reaching. After we flatten the curve of this pandemic, I wonder if people will still appreciate that, in Rambam’s formulation, there is a spiritual value of “running to the synagogue.” Will it not seem more convenient to log in from home?

Here are some of the solutions other rabbis are offering, why I believe they fall short and an alternative suggestion.

While most Orthodox authorities maintain that a minyan consists of 10 adult men gathered together “in one place,” others argue that the minimum requirement is for them simply to be able to see each other (Pesahim 85b, Rambam’s Laws of Prayer 8:7 and Shulhan Arukh Orah Hayyim 55:13-14). Since we generally resolve doubts about the rabbinic requirements for a minyan leniently, the argument goes, we can consider videoconferencing as seeing each other — as leading Israeli rosh yeshiva Rabbi Eliezer Melamed has reportedly argued. Sephardic Chief Rabbi Yitzhak Yosef’s variation on this is that if 10 adult men are physically “in one place,” then others can join via the web.

No Minyan
These arguments are a leap of imagination. On a video call, we see images of others, but it is not the same as seeing someone through an open door or window.

Rabbi Yuval Cherlow, a rosh yeshiva, or head of school, in Israel, has taken a different approach by questioning what would be so terrible about saying Kaddish at home without a minyan. Since Kaddish does not mention God’s name, saying the prayer at home privately, though not ideal, would not constitute taking God’s name in vain. In our situation, Rabbi Cherlow correctly says, the greater transgression would be to violate the instructions of the health authorities.

This offers a possibly meaningful option for mourners, but I believe it obscures the uniqueness of Kaddish. While most prayers are a dialogue between God and people, the Kaddish is a conversation between people. Talmudic sources note that the merit of Kaddish is for those who respond (Shabbat 119b and Berakhot 57a). All of this is missed when someone says the words alone.

Loss Of Emotional Energy
Students often tell me that friendships and relationships are stronger when they aren’t conducted through screens and devices, and that they are seeking more personal ways of connecting with one another outside of the classroom. No device can replace the emotional energy of dozens of students singing together on Shabbat afternoon. And while fewer minyan attendees on campus need to say Kaddish than do at a synagogue, the responsibility to physically be at services to support a friend saying Kaddish is a powerful opportunity to shape one’s character.

Our ancestors created legitimate substitutions for Kaddish when a minyan wasn’t available, or when someone arrived late to shul, by using biblical verses with words similar to Kaddish — and we would do well to avail ourselves of those solutions now. According to the 13th-century work Sefer Hasidim, “a person who lives in a village without a minyan or who arrived late to the communal prayer after they had already said ‘may God’s great name …’” can say a modified version of the traditional prayer privately at home.

Maintain Traditions
A small number of American Orthodox synagogues, including the one I attend in this Boston suburb under the guidance of Rabbi Benjamin Samuels, learn Torah together online and then allow mourners to recite a medieval “Kaddish for an individual” poem. This approach allows us to maintain the integrity of communal prayer and locate a solution within the tradition without stretching halacha (Jewish law) beyond its limits.

We have rushed to get our normal lives online — prayer services, lectures, music lessons, Torah learning and school. But we may be deluding ourselves by trying to live normal lives during a pandemic. Life right now is drastically different. We need to find ways to nurture strong interpersonal ties — and maintain our traditions — so that our communities will still be there when we are ready to go back to them.

Maggid—We retell the story of our exodus while awaiting freedom from the shackles of a new disease
‘Painful and deep’: Jewish nonprofits face dire economic prospects during and after coronavirus