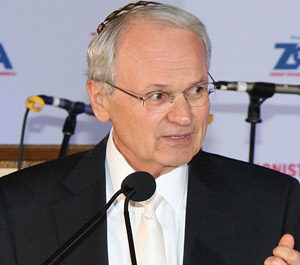 NEW YORK CITY (JTA) -Morton Klein, president of the Zionist Organization of America (ZOA), has apologized for a tweet in which he suggested that actress Natalie Portman’s criticism of Israel “gives credibility and legitimacy to the ludicrous, false, nonsensical belief that beautiful women aren’t too bright.”

“Although not intended, I now realize that my comment could be construed as offensive and I sincerely apologize for it,” Klein said in a statement . “I do not retract my criticism of Ms. Portman’s decision not to go to Israel and accept the award, but I should have focused solely on her decision, without any reference to gender or appearance.”

Klein wrote the tweet after Portman decided not to accept an award in Israel because she did not want to share a stage with Israeli Prime Minister Benjamin Netanyahu. Many readers of the tweet, including several prominent rabbis, noted Klein’s comment perpetuated stereotypes about attractive women.

Klein also apologized for a remark he gave to a JTA reporter Thursday, April 26, in which he defended himself against charges of misogyny by saying one of his colleagues, ZOA legal affairs director Susan B. Tuchman, “is a very attractive woman and she’s smart.”

“I unfortunately didn’t choose my words carefully and thoughtfully and regret my comments,” said Klein. “I apologize to Susan, to all the other women who work at the ZOA, and to all our employees, women and men, who fight hard for Israel and the Jewish people every day. They all work here because of their talents and abilities, their passion and commitment, and their valuable contributions to our work. I did not intend to offend, hurt or denigrate any of our employees or the work we are so proud to be doing at the ZOA. To all of them, I sincerely apologize.”

Reaction to his initial statement had been furious.

Rabbi Denise Eger, the immediate past president of the Central Conference of American Rabbis, asked, “Really? This is how you talk about women? [T]ime for Mort to step down if he can’t treat or talk about Jewish women appropriately.”

Libby Lenkinski, the vice president for public engagement at the New Israel Fund, said in an e-mail, “With all the hand-wringing about the lack of women in top leadership roles in major Jewish institutions, the answer is right in front of our faces: chauvinism is rampant, excused, and totally allowable.”

Rabbi Jill Jacobs, who directs T’ruah, a rabbinic human rights group usually on the opposite side of ZOA on Israel, said his remarks were typical of a dynamic within Israel and the pro-Israel community to deny women agency when it comes to pronouncing on security issues.

“There is a misogyny that enters the Israel conversation and a shutting down of women that women can’t be smart enough and knowing enough to talk about certain issues like security,” she said.